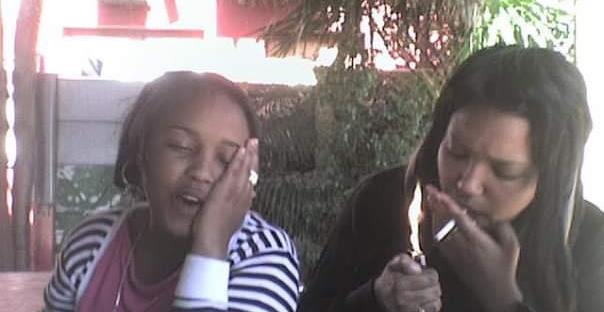 A few encounters in the last few weeks, coupled with the viral ‘How hard has age hit you’ challenge, has forced me to be introspective and acknowledge both personally, and of course publicly that I, for all intents and purposes used to be an absolute fucking piece of shit.

Mrs Jacobsen from high school was right in her predictions of me;  through her Afrikaans tears she told me that one day I would understand how she felt – that I had hurt her as a mother, a teacher and as a woman; and that when I grew up I would be surprised at what life would throw at me…. ( I made fun of her hair – It was a thing)

Crescent Clinic’s common area was a wide, lounge-like space.  I fondly remember the smell of Rothmans Mild exhaled from the un-brushed mouths of anxious people. I spent my days there sitting on the large, worn in cushions atop bamboo furniture – just staring out of the window.

Besides my own painful thoughts, I could engage with the other patients and visualize all of their trauma as they shared boastfully, out of sight of the nurses and doctors.

I may have spoken about this before, but for the last few weeks, memories I didn’t know I had have been surfacing and forcing me to feel the emotions I assume I have been repressing all these years.

I have never considered myself to be emotional.

As a child, and up until only a few years ago I sort of prided myself on not being able to relate to the pain of others. I stored away any feelings that were uncomfortable – these feelings would only go as far as my chest, then be ignored until they dissipated.

I chalked it up to being raised ‘hard’ and ‘strong’.

I know now that strength is subjective.

In the lounge at the clinic, I met a woman who we will call Margaret.

Margaret was one of the few older ladies at the facility. Her knitting captivated all of her attention most days, but she wasn’t necessarily silent or mysterious.

She had a clique, so I knew she either frequented, or had been there so long she had made the clinic her home.

The rumours about Margaret were that she had been driving her family home from an end of year holiday a few years prior, when a drunk driver T-boned their car.

Her children and husband had not been buckled in, and from what I remember – her three teenagers were all killed on impact.

Her husband was in a coma for a few weeks, but woke up eventually – to the new reality of being a quadriplegic.

He became severely depressed, and refused to eat.

The depression apparently killed him.

Margaret, however emerged from the accident completely intact.

Regardless, the point of sharing this memory with you is that when I heard the story, I felt nothing. Most times, years ago, I felt annoyance at the inconvenience of other people’s miseries. I was now obligated to act gentle around her.

Being responsible for the wellbeing of another human being is a task I wouldn’t wish on my worst enemy; and yet, it is a labour of love that brings me the most joy I have ever been able to feel.

Recently however, my anxiety has started to lay down with me in bed each night, resting its head on my chest.

Even falling asleep is problematic, and if I wasn’t physically exhausted from actually parenting, I probably wouldn’t ever sleep because of worrying about parenting.

Here’s the thing; I think about my children dying; a lot. What if something happens to the school van? What if another child hurts them at school or at crèche?

When I get up to pee at night, I have a ritualistic ‘check if they are breathing’ thing that my husband doesn’t really understand.

Then the other night Margaret popped into my head, and like a ton of bricks the emotion of living through what she had experienced hit me right in the chest. I cried, loud, ugly crescent clinic tears till I just surrendered and sat on the couch, embarrassed by how cold I must have seemed all those years ago.

Another memory from years before Crescent clinic, in my teenage days only now incites nausea in me, when before I used to laugh at the situation.

I will never forget Najwa. She was a mentally and physically challenged girl who was one or two years my junior, who really wanted to be part of my friendship group.

The world was different, less kind back then. I am not making excuses – just acknowledging that being a nineties, noughties kid was brutal because bullying was cool (that’s what the American Teen movies told us to do).

Najwa (which we will call her for the purposes of anonymity) had an unusable arm. I am not sure if this was a birth defect or an accident – I am sure she told me which, but I never listened to her long enough to retain anything.

When we saw her walking down the hill past my house, we would remain inside. I remember not even opening the door when she knocked to check if I was home and wanted to lam.

I didn’t want to be seen with her.

Eventually, as the years passed, we all used to hang out in my later teen years at a house in one of the upper roads of Pelican heights.

Near this house was the infamous ‘palace’, an unfinished mansion that the drug addicts used as a den and general ‘high-sex’ spot.

One day, Najwa told me a story.

Najwa said that one of the boys (who was a few years our senior) took her to have sex in the palace.

He said he liked her and that they dating.

Najwa said he bent her over and she felt a lot of pain, and she wanted to know if this was normal for sex.

She took us into the palace, and from a creased ShopRite packet, removed a blood soaked light blue Levi she had worn after intercourse.

She hid the jeans because she didn’t want anyone to see it and laugh at her.

Now, one would think that I would have immediately taken her to the police, or even hugged her.

I did nothing. I felt nothing.

I don’t remember too much but I know I made an excuse to stop talking to her and for years after, kind of laughed at the fact that someone wanted to have sex with her.

A few years later I saw the guy.

He was pretending to be homeless, behind Cavendish Square – in an attempt to scam kind folks for drug money. His one arm was hidden inside his oversized sweater, as he worked under the guise of being handicapped.

He saw me, and smiled – he came over and proudly whispered his scheme. We both giggled. As if mechanically programmed, I gave him some money and laughed with him as if I didn’t know that he was a predator and a con artist.

I just knew that Najwa wasn’t my friend – so she wasn’t my problem.

By 2019, I had been raped many times. I have been beaten and taken advantage of. I have been laughed at. I have daughters and a son who I hope never experience rejection or ridicule.

Sometimes when I think about Najwa, I physically hang my head with immense shame. I wasn’t taught better, but I knew better. I wish having to experience pain wasn’t the only way to understand the pain of others.

My punishment is that she still haunts me.

My reward is that she still haunts me – and it informs how I treat other women.

Before Najwa, before my teenage years, I attended a predominantly white catholic school in a very leafy southern suburb.

I didn’t take my Xhosa teacher seriously, based solely on the fact that she was black and a woman. From the reactions and words of my elders and peers, at the time, I thought that this disqualified her from any respect.

I never did her homework.

I made jokes at her expense.

I didn’t even attempt to speak to her in the same manner I addressed the white teachers.

She didn’t last long at the school, and even though I don’t have many memories of her, I know it wasn’t me that made her leave.

It was a whole school full of my kind.

I walk into spaces in which I am openly not welcome. I want to cry when men with less knowledge than me speak down to me like I am a little girl – whether I am their professional superior or not, I remain a coloured girly.

People see me as cheeky for insisting on the acknowledgement of my authority.

Sometimes I cringe when memories surface in which I was the villain. Some days I feel proud of who I have chosen to become, despite my abysmal track record.

There are many stories I can tell you, that will all explain my journey to becoming this version of Shana. But I don’t think I can make you really ‘feel’ it.

So, here’s a challenge I would like you to consider; how hard has aging hit you?